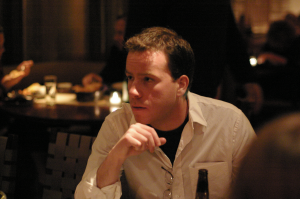 In this installment of our Industry Influencer we’re talking to Chuck Sambuchino of Writer’s Digest Books. Chuck edits the Guide To Literary Agents and the Children’s Writer’s And Illustrator’s Markets. His Guide to Literary Agents Blog is one of the largest blogs in publishing. Chuck’s 2010 humor book, How To Survive A Garden Gnome Attack, was optioned by Sony Pictures, and his second humor book, Red Dog/Blue Dog, is a photo collection of dogs doing liberal and conservative things. Chuck has also written the writing guides Formatting & Submitting Your Manuscript and Create Your Writer Platform. Find all his books on Amazon here. In addition, he is a freelance book & query editor, husband, sleep-deprived new father, and owner of a flabby-yet-lovable dog named Graham. Find Chuck on Twitter.

CONTEST: Leave a comment on this blog post by April 11 to enter to win a FREE copy of one of Chuck’s books! Contest now closed.

Tell us about Create Your Writer Platform. How does the book enrich a writer’s life? 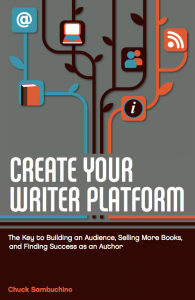 This is a book all about how to build your visibility, networking, and self-marketing potential as an author. It talks about things like easy changes you can make all around you each and every day—down to nitty-gritty tips on things like blogs, social media, public speaking, and more. I wrote the book because the subject of “writer platform” became popular about five years ago, and the conversation just keeps getting louder.

When’s the right time for a writer to start building his/her author platform?

Immediately. A platform is built before you need it. Think about it. You wouldn’t want to have a book come out, then spend years trying to develop a newsletter with 10,000 subscribers, would you? The goal is to develop the fan following now, so that when your book comes out, you already have channels and avenues in existence that you can use to sell your book (such as that newsletter). You’ve already made friendships and relationships, rather than seeking them out solely in the interest of hocking your book that just came out.

Keep in mind that every little bit helps. Start slow, but start now. Also keep in mind that when developing a platform and getting “out there” in the world, you do not have to go it alone. This is one of the Fundamental Principles of Platform. If you feel that starting a blog is too daunting, contribute to existing blogs instead. You don’t have to start your own organization if you can help out with another or speak at established events. Work with others wherever you can. You see this kind of collaboration all around you, every day.

Does building a writer platform have to be expensive? Can you recommend cost-effective ways of reputation-building?

I’m not aware that platform-building costs much money at all. The only real costs would be website construction and buying domain names, etc. But all those costs would likely run you only a few hundred dollars a year (which you can then write off). The Internet has made it very easy to meet people and connect with others. You could always travel to California for a conference, sure (and there is great value in conferences and events), but you can do plenty via Facebook and Twitter as well. Internet networking is quite cheap.

In terms of keeping costs down, I will say this: Try to combine attending a writers conference with an out-of-town trip to see a relative. If you’re headed to meet in-laws in Seattle, Atlanta, Boston, or wherever, go during the weekend a conference is held in town. That way, you can combine costs, and then write off a bunch of expenses.

At Web Design Relief, we help writers develop their platform starting with strong Web design specifically for authors—and we’ll admit that we’re biased when it comes to the power of the Web for platform building. Do you think it’s possible in this day and age for a writer to develop a strong platform without having a Web presence?

Great question—one that I asked literary agents in my book. And agents said it is indeed possible, though not recommended. Usually these types of successful writers are longtime journalists with boatloads of media contacts. 99% of writers do not fit into that category of writer, so 99% of writers should be online in some way.

I often advise newbies to the platform arena to take steps in developing at least these three things:

1. Create a website. It doesn’t have to be pretty. It just has to be clear and present. The point is: When people Google your name, have something turn up.

2. Develop a “new school” platform plank. Be on Twitter or be actively blogging. Both are good, but pick at least one and try to dig deep and make some progress.

3. Develop an “old school” platform plank. You can write magazine articles, be an on-air contributor to a local TV or radio show, or try to speak in public. Any of these are good; try to get at least one.

Through these three things, you should slowly start to get your name out there, accrue followers and fans, etc.—and build your platform!

We’re dying to know details: Can you tell us about getting your wildly popular humor book How To Survive a Garden Gnome Attack optioned for film with Sony? What was the process that led to the option?

A lot of literary agents, my own included, have contacts in the film world. Whenever these agents sell any book, they pass the manuscript on to their co-agents in Hollywood and ask them if they could stir up attention to adapt the book into a movie. This is a very standard thing to do with almost any book that’s sold by an agent; many books get passed around in Los Angeles, but few make it past that first step.

After GNOME ATTACK was released, the manuscript, like many others, was sent to a Hollywood co-agent to generate possible interest from producers. Since this protocol is so standard, I tried not to get my hopes up. But then, we received some huge, out-of-the-blue news. Robert Zemeckis, who directed Back to the Future and many other great movies, had gotten wind of the book and wanted to discuss it with my co-agent representation in Los Angeles. (His people called my people!)

You must realize that I had absolutely nothing to do with this process. All of this was handled by my agents. I just received occasional phone calls to update me on the process.

A few months later, Zemeckis’ production company, ImageMovers, formally optioned the book—meaning that they bought film rights for a limited amount of time in the hopes that all the pieces come together and they can actually greenlight the film. It was quite a whirlwind experience, and I still can’t actually believe it most days. One of my grandest hopes is that this film actually gets made; I can easily say that attending the premiere would likely be one of the greatest moments of my life. (Sometimes my wife starts talking about what kind of dress she wants to wear on the red carpet!)

A lot of people are discussing platform and social media these days. What makes your book unique?

One of the best parts about my book is that it’s not just me talking. I did long interviews with 10 different literary agents and sprinkled their advice and opinions throughout the book. Also, the last third of the book is 12 long author case studies that examine different writers who developed their platforms from scratch. The goal was to show you different paths so you can learn by example.

The truth is that I am often wary of advice when it is just the opinion of one person. For this book, I wanted to cull together advice from dozens of agents, writers, and publicists, then use their feedback to synthesize the best tips for writers. It’s always good to hear a lot of thoughts and feedback before making a decision.

So we heard that you’re a new father. How is your little one?

Little Geneva Rose Sambuchino is approaching three months old, and she is an energetic bundle of love. She likes it when I dance with her in my arms, and she likes falling asleep while listening to me playing music on the piano. Overall, she’s one cool girl. My wife and I keep arguing over who she looks like more.

Chuck, did you want to give away a copy of one of your books to one random commenter?

I’d be happy to. Just send me the winner’s address.

QUESTION: How did you know the time was right for you to begin building your author platform?