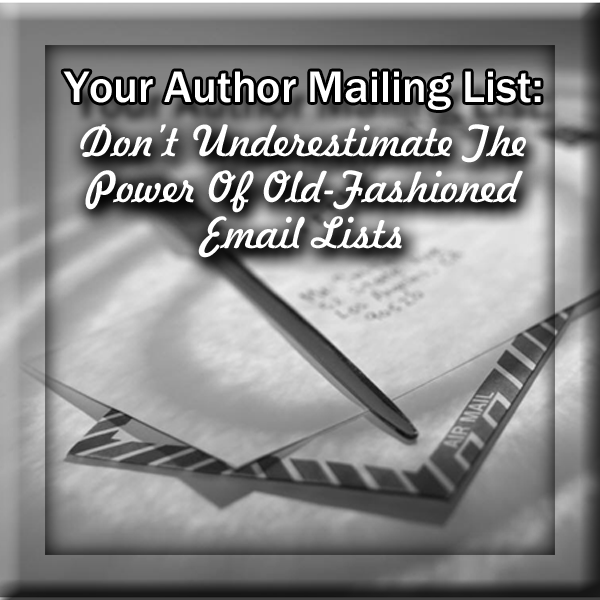 Here at Web Design Relief, we’re frequently proclaiming the value of social networking for writers who want to build their reputation. However, cultivating a vibrant social network is only one piece of developing a strong author platform.

To truly make the most of your online opportunities for promotion, don’t overlook the power of your “old-fashioned” author email list.

Your mailing list belongs to you. When you build up your followers on social media, you benefit from the potential of a viral response. However, your social network friends and fans are connected to you at the whim of the corporations that control the various social platforms.

Here’s an example to consider: At one point, Facebook modified its algorithms in order to do a better job of displaying to users only the content that they would most enjoy seeing. However, if you’re a writer and Facebook decides that you would not be interesting to a certain number of your fans, then your posts may not appear as prominently in their feeds.

Any social network can change its rules at any time. But you are the owner of your mailing list. You make the rules.

While it’s never a bad idea to put some effort into the social networking site of the moment—because, of course, it’s important to go where the people are when you’re promoting—it is also a good idea to have a backup plan.

You don’t have to share the spotlight. When you’re at a writing conference, appearing on a blog, or hanging out on a social network, chances are you’re vying for attention with many other writers.

When you send an email to each individual who subscribes to your mailing list, you are the star of the show for that moment. You have full control of the information that your readers see. You don’t have to compete.

Taking A Multifold Approach To Promotion

While meeting new friends on your social networks is a fantastic way to make connections and to build a readership, your mailing list may turn out to be a more permanent way of maintaining an ongoing connection.

There are really great ways to move people from your social networks to your private mailing list. And in our next article we’ll be talking about some of those techniques. Stay tuned for more great information!