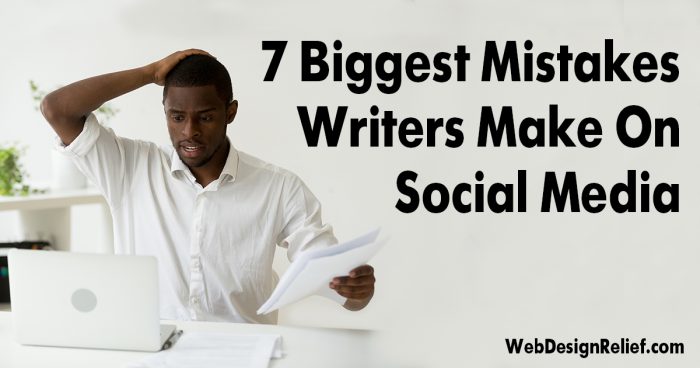 Whether you’re new to writing or a seasoned author, you should be developing a following on one or more social media platforms. Aspiring writers need to grow their audience and establish their online presence. Self-published authors can use social media to boost the promotion for their book launches. And nowadays even authors who’ve landed huge contracts with traditional publishers are expected to do social networking with gusto.

Yet the social media savants at Web Design Relief know that writers are not always skilled in the finer points of social networking. Here are examples of what NOT to do:

Constantly screaming “Buy! Buy! Buy!” is NOT the most effective way to make a sale. The hard sell will make people tune out or unfriend you.

Social networking is all about making connections and cultivating relationships. Once rapport is established and maintained, your followers will be more likely to pay attention when you post news of your book launch.

The general rule of thumb is to minimize promotion to one out of every ten posts.

Posting Only Once In A Blue Moon

One of the most important rules of good social media management is to post regularly. If you disappear for an extended period of time, so will your followers, since less engagement means your posts will show up much less frequently in your followers’ news streams. And if anyone who visits your Facebook, Twitter, Instagram, etc., sees that the last time you posted was six months ago, they’ll assume you’ve abandoned the platform.

Try to post at least once daily. Don’t know what to post? Check out this cheat sheet.

To draw people to your social media account, you should offer them something they want. What you offer could be something concrete, such as a monthly giveaway, or something intangible, such as a behind-the-scenes glimpse into your books, your future writing plans, and even what makes you laugh, cry, and tick as a writer.

Here’s the bad news for introverts: Posting once a day and then fleeing to your writing garret won’t do it. You need to Like and Share posts/tweets, and perhaps even start actual conversations in the comments. Authentic interactions help develop relationships. The more connected your followers feel to you, the more likely they’ll do whatever you ask when the time comes for the big book launch.

Social media posts with images get a lot more engagement than those without. Liven up whatever you’re posting by making images of your own on a site like Canva, or by using stock pics or your own personal photos.

Forgetting To Use Hashtags

Hashtags help you reach a larger audience with a specific interest, and they’re particularly powerful on Twitter and Instagram. Adding a targeted hashtag can bring you to the attention of potential followers interested in, say, #freeBooks, #knitting, #financialtips, or #rescuedogs. While one or two hashtags are sufficient for Twitter, you can add as many as you want on Instagram.

One Caveat: With the changes made to Facebook’s algorithms, hashtags don’t help on Facebook and may even hurt—so don’t include hashtags in your Facebook posts.

There are a lot of services out there that promise to increase your social media following by thousands in just a few months. But buyer beware—many of those followers may not be targeted to your particular interests, or they could just be bots. Publishers looking at social media followings focus on engagement and interaction rather than raw numbers. Organic growth is harder but more rewarding because a greater percentage of your followers will be interested in you and your work.

A social media following won’t happen overnight—but don’t be discouraged! Every platform focuses on a different audience, and it can take some time for you to effectively and efficiently find your followers. Growing a platform is a process. With time and effort, you’ll have a loyal following behind you.

Question: Share your expertise! What has worked for you to attract organic followers to your social media platforms?