by Blog Editor | May 2, 2019 | Grow Your Author Platform, Marketing And Promotion, Social Networking For Writers | 0 comments 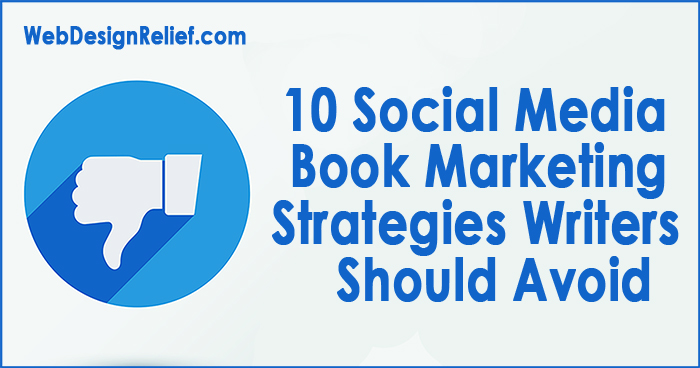 These days, the life of an author is often divided between writing books and online marketing on social media. But do you know what kinds of posts and book promotions are unwelcome—or even prohibited— on social media platforms? At Web Design Relief, we know that even innocent efforts to attract new fans and friends may run afoul of the powers that be. And if your accounts are suspended, blocked, or banned, you’ll be cut off from your most powerful online marketing tools. Here’s how to play it safe when promoting your book on social media.

A contest is a great way to create excitement about your book. And while it may be tempting to require your fans or followers to “tag their friends” or “share this post” as a way to submit a contest entry into your book giveaway, this option is expressly forbidden according to Facebook Promotion Guidelines.

There are thousands of public and private groups on Facebook that cater to book lovers of every genre. As an author, these are great places to do some online marketing by connecting with avid readers. However, if you join too many Facebook groups in a short period of time, Facebook is likely to red-flag you as a potential spammer. Best advice: Don’t join more than a few groups a day.

Sending Too Many Friend Requests

You want to build a big community, so it’s natural you’ll request new friends. However, if you send out too many friend requests in a short amount of time on Facebook or Instagram, these platforms may flag you as a possible bot. Rather than sending all your friend requests at once, do a few every day to avoid having your accounts blocked or suspended.

Furthermore, to avoid being labeled a book marketing spammer, it’s best to send requests to people with whom you already share friends, groups, or interests. If too many of your friend requests are rejected, those individuals may mark your requests as “spam.”

Posting Too Often And Too Quickly

As an author, you’re told to post multiple times a day and respond as quickly as possible to anyone who comments in order to keep your followers engaged. But if you upload the same exact post to multiple places within minutes, Facebook and Instagram will recognize this behavior as similar to that of a spam-bot. The platforms are likely to squash such activity with a suspension or a shadow ban.

Post frequently, and answer fast, but make sure to leave at least a few minutes between shares and posts so you don’t mimic the behavior of a software macro.

There are many programs available that offer to help you automate your book marketing strategy on Pinterest and Instagram, but buyer beware: At the time of this article, both of these platforms prohibit the use of automated systems. Data scrapers are also banned from Instagram and Pinterest, so you’ll just have to gather the links or images you need for your next blog post yourself.

Pinterest has very specific rules as to where you can put the link associated with the picture you’re posting on your board. Click “edit” on a posted picture and insert the link in the box labeled “link.” You can be suspended or banned for putting your link anywhere else in the metadata.

Attention, authors writing serial killer or noir thriller novels! Community standards vary in terminology across social media platforms, but content that is perceived to incite violence, such as terrorist activity, hate speech, criminal activity, and cruel or insensitive content that’s directed to particular victims or classes of victims, etc., is prohibited. Most platforms also strive to stop and pull down images of graphic violence, including gory surgical procedures, and ban or suspend the accounts of those who post it.

Attention, writers of erotica! You won’t be banned for sharing a photo of the naked sculpture of Michelangelo’s David, or for sharing a post that includes non-sexual nudity for educational or medical purposes, but remember to be mindful of the community standards of each platform when it comes to what is considered lewd or pornographic content. Most platforms will ban users who post prohibited content such as:

Don’t pull random photos or graphics from the Internet to create your posts. While authors may gasp in horror at the suggestion that they would ever copy someone else’s intellectual property, copyright infringement happens often online—particularly when it comes to graphics and photos. Make sure the images you post are yours, that you’ve attributed them if necessary, and you have the right to use them. Limit your photos to those found on sites offering royalty-free images like Shutterstock. Multiple violations won’t only get you in trouble with the copyright owners, but they might land you in Facebook Jail or get you banned from Pinterest or suspended from Twitter.

If you do run afoul of social media platform rules, they’ll usually send a warning or, at worst, briefly suspend the account before taking more drastic action. Avoid this fate by protecting your accounts, and all the hard work you’ve done to grow them, by being aware of community standards and avoiding spam-like behaviors. In the end, the best way to avoid the Facebook Sheriff is to tailor your posts for high engagement by focusing on what makes you and your work unique and wonderful.

Question: What is your favorite social media platform and how do you use it?