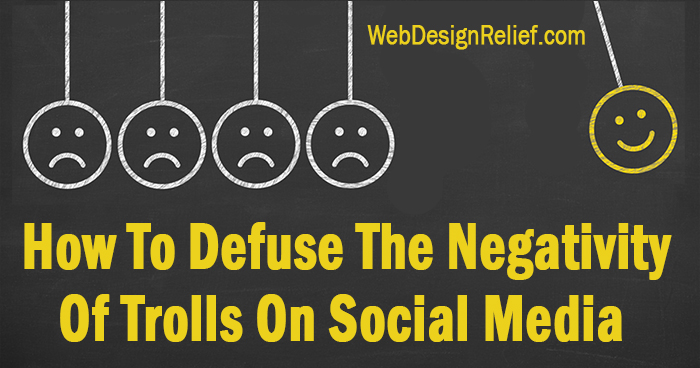 Once upon a time, trolls only existed in fairy tales, lurking under bridges and feeding on unwary travelers. Today they lurk on the Internet and feed on the conflict they create on social media.

No online community is safe from the risk of being attacked by trolls. Web Design Relief knows the dangers and difficulties of dealing with Internet trolls, and we’ve gathered some tips and suggestions on how to defuse negativity on social media.

Identify what type of troll you’re dealing with. Trolls get their jollies by getting a rise out of you or your followers. Their intention is to humiliate or ridicule a targeted victim. They want to tarnish reputations and discredit businesses. But, it’s a mistake to believe that all trolls are teenage boys with too much time on their hands. While it’s true that most trolls are male, studies have shown that they are not always who we think they are:

Use agreeable phrases to reduce tension. Polite gestures such as thank you, I get your point, here’s what we have in common, and/or I see my mistake might de-escalate the situation or lead your attacker to believe you are not easily provoked. Of course, this doesn’t work in all situations. Your reluctance to take the bait may come across as being vulnerable and weak. Some trolls may not be challenged enough to continue. Others will think you might be easy prey. Another thing to consider when placating a troll is that you must be careful not to ostracize your followers or disappoint your friends in the process.

Respond with facts. Let’s face it: Trolls do not fight fair. They like to use disparaging off-topic comments to start fires in your social media feeds. If a troll accuses you of spreading lies or misinformation, you can handle it one of two ways. Either admit you were mistaken (if indeed you were) and apologize (believe it or not, folks, information does vary online) OR respond calmly with facts. Hose down inflammatory comments by identifying the resources that led to your conclusion. Show examples if possible. A good offense is the best defense. And don’t forget what we’ve said about using positive remarks to defuse negativity. Something as simple as I see how you came to that conclusion but this is what I found might help neutralize an attack.

Counter with humor. Treat trolls like comedians treat hecklers. Either disregard them and move on or respond with something that makes light of their virtual assault BUT not in a derogatory manner or personal attack (trolls hate competition). If enough followers chime in, the troll may feel outnumbered and throw in the towel. But a word of caution if you attempt to use humor to subdue trolls: Sometimes, this can backfire—especially if the troll feels embarrassed or ill-equipped to handle your humorous attempt to diffuse the situation. Keep in mind, Internet bullies do not like to be bullied or mocked.

Do not feed the trolls. You know those warnings about not feeding the bears, alligators, or your moochy cousin Albert? If you toss them some popcorn, you will be forever associated with food. Trolls aren’t much different in this respect except the food that nourishes them is negative human emotion. Show them one scrap, one teeny tiny morsel of anything remotely related to fear, pain, guilt, or insecurity—and they will know exactly where to go to be fed. No matter how hungry trolls are for controversy, feed them only positive comments or ignore them completely, and you will likely starve them out. Recognize the hunger signs early on and don’t be baited.

Block and report. Most social media sites have moderators who monitor discussions and intervene when someone is being toxic or a certain post is headed in the wrong direction. If a commenter continues to display inappropriate social media etiquette, the moderator can use the block/report feature to ban the person or people being discourteous.

Unless you appoint a moderator on your personal blog or website, you will be the one doing the blocking. If you are overly concerned about how people will respond to something you post, an option that might prove beneficial is to pre-approve comments before they go live. These safety features were created for a reason. But use them in moderation. Not every rude or disagreeable person is a troll. Some of them are just rude, disagreeable people.

However, there may be times when online harassment crosses the line. Hate mail, death and rape threats, and threatening comments toward family and pets are not uncommon tactics used by trolls on the Internet. These threats should not be taken lightly. Remember, not all trolls are harmless—some have proven to be very dangerous. If a situation escalates and you feel threatened, here are some things you can do to protect yourself:

Alert family and friends to the situation. This isn’t just for support. If people around you know what’s going on, they will be less likely to inadvertently divulge your personal information to strangers pretending to be friends.

Save screenshots of the harassment and/or threats. This will help if you are forced to involve law enforcement (see below). There are ways to unveil anonymous trolls.

Avoid posting your whereabouts or daily routine on social media. Data location apps were designed to help you discover new things, but keep in mind, they also make it easy for people to discover you and your precise location.

Disable the geotagging features on your smartphone. Metadata is like bread crumbs for stalkers. It will lead them right to you. Think it’s safe to take a quick photo of yourself using your cell phone camera to upload on social media? Think again, Hansel and Gretel. There is so much metadata recorded in a digital picture, it’s like a map and you are the red star right in the center of it. Be smart about your smartphone.

If it gets really scary, involve the police. They have departments specifically created to assist with cyberbullying. Depending on the severity, you may also want to fill out the Internet Crime Complaint form known as the IC3 on the FBI site.

While the Internet might sometimes seem like a scary place with trolls lurking in every dark corner, taking these few basic precautions will help keep them at bay. And remember, there are lots of nice, friendly, interested people on the Internet and social media who simply want to follow you and your writing!