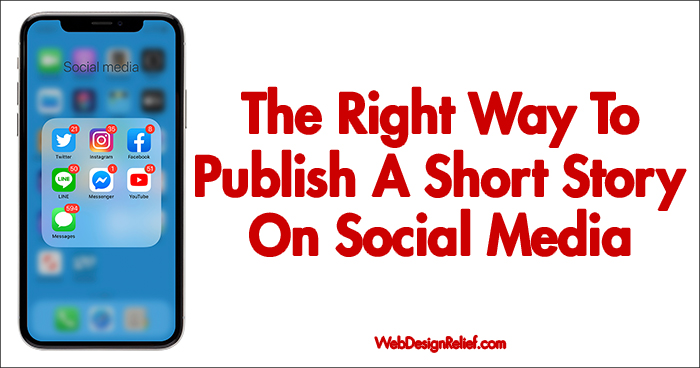 If you’re a short story writer who wants to add something new to your publishing options, you might want to consider sharing your work on social media. More and more writers are discovering Twitterature: micro stories that fit within the character limit, or entire novels broken into serialized snippets stretched out over hundreds of tweets. You might also publish a short story or excerpts on Facebook or even Instagram. But be forewarned—the majority of literary editors consider a short story published on social media as previously published, and won’t be interested in republishing rights. That being said, some works published on social media have proven so popular, they’ve been traditionally published as well. At Web Design Relief, we know there’s a right way and a wrong way to publish your short story on social media.

David Mitchell, bestselling author of Cloud Atlas: Mitchell once published a short story called “The Right Sort” in a series of 280+ posts on Twitter! The story was published over the course of a week. Mitchell said his publisher gave him the idea.

Jennifer Egan, Pulitzer prizewinner: Egan published an 8,500-word story called “Black Box” on Twitter, posting a new line every minute for an hour each night. She has said she spent about a year writing and revising the story before posting it—it was originally twice as long!

Writers in the We Tell Stories project from Penguin Books: Six Penguin authors used different social media formats to share stories with their readers, including author Toby Litt and his piece “Slice.” This story was broken into a series of blog posts and included tweets from the perspective of the main character and her parents.

Neil Gaiman—and his Twitter followers! Gaiman once worked with BBC Audiobooks to create a short story on Twitter. He tweeted the first line of a fairy tale and then chose the next lines from 124 followers! A fun, interactive publishing format like this is very creative and could win you fans and followers.

How To Become A Social Media Published Writer

Know the pros and cons of social media publishing. Social media publishing is a fun and different way to garner followers and share your writing. But know that online publishing can get a little tricky if you plan to submit the piece to traditional publishers later. The short story you choose to publish on your social media platform should not be something you also hope to submit to literary journals, because most editors have strict rules about not republishing anything that’s already available online. Instead, choose a short story specifically written to be published on social media or your blog, or use a story that’s already been published in a journal and the rights to which have reverted back to you (be sure to acknowledge the first publisher).

Prepare your short story. Some authors prefer to have their entire short story written and edited before they start a series of tweets or posts. This may be the best way to stay organized and ensure your story is proofread and polished. If you don’t want to write the complete story before you start publishing it on Twitter, your blog, or another social media platform, at least have an idea or outline of how the story unfolds so you don’t veer off track.

Get your readers and followers excited! Announce your social media publishing venture to your followers before you start posting or tweeting. Let readers know the start date and when they can expect to see installments. Tease your followers with small snippets or a log line to get them interested!

Optimize your post. Once you start posting installations of your social media piece, be sure to grab attention and attract a wider readership. If you’re using Twitter to publish your story, don’t forget to include the right hashtags like #TwitterFiction and #Twitterature. Consider creating a unique hashtag just for your short story so that readers can easily follow along!

Get started—and stick to a schedule! Staying on schedule is very important to the success of social media publishing. Readers will lose interest and move on if they don’t see the next installment when you promised it would be posted. Decide how far apart you want to post your excerpts—a few hours? A few days? Every week? At what time? Then be sure you note these details on your calendar, or set reminders on your cell phone or computer, so that you never forget to post. If you’re going on vacation, be sure to automate your posting schedule.

Bonuses Of Publishing On Social Media

In addition to being a great creative project, posting Twitterature (or posting on any other social platform) can have a larger impact on your writing career. Do you also want to build your author mailing list? Use some installations of your story to refer people to a sign-up link! Itching to get new followers? Encourage your readers to follow you if they’re enjoying your posts. Want to catch the attention of literary agents? Be sure to follow a few agents, interact with them on social media, and note the hashtags they follow so you can use those when promoting your story.

Question: What social media platform would you publish a story on, and why?