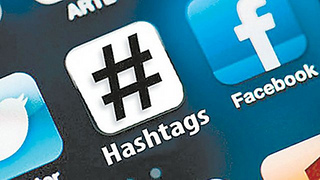 If you’re keeping up with technology and pop culture these days, you’ll surely have heard references to something called a “hashtag” by now. Thanks to the pervasive nature of Twitter, the term has crept into our day-to-day dialogue to the point that it’s become a joke to some (and an annoyance to many, we’d guess).

But what if you’re not that familiar with the word hashtag? What is a hashtag? And what does it have to do with anything outside of Twitter? It may feel like you’re missing the punchline. Furthermore, you might not realize the origin of the hashtag—or just how valuable it can be to someone trying to promote his or her writing online.

Below, we’ll answer all of those #burningquestions you were afraid to ask.

Simply put, a hashtag is a word or phrase marked with a hash symbol (#) that is meant to serve as a keyword on various social networks. Hashtagged phrases are often clickable, bringing the user to a stream of matching content. They are used for ongoing conversations (#litchat on Twitter) and content categorization (#throwbackthursday on Instagram), as well as a bit of fun.

You can use established hashtags to join a conversation (for example, anyone who wants to find out more information on #NaNoWriMo after you post about it can click your hashtag and find out what others are saying). But many people will invent a totally new hashtag to add some extra punch to a tweet or status (does #winning ring a bell?).

A few months ago, the answer to this question would have been no, but as of the publication of this article, one can indeed use hashtags on Facebook. This is exciting news for people who cross-post between several social networks.

So if you plan on hashtagging your Facebook content to reach a wider audience, make sure that it’s set to be visible to the public—and know that if the content is on your personal profile, anyone on Facebook can see it.

3. How can hashtags help me connect with new readers?

There are a variety of hashtags—especially on Twitter—that people use specifically to talk about writing. If you take a look at the Writer’s Relief Twitter page, for example, you’ll see a lot of things like “#writing” and “#pubtip.” These are established hashtags that writers across Twitter use to connect with each other.

To that end, you can use hashtags in your tweets to let people know you’ve got something to say—and something for them to read. Try adding a hashtag of your genre when tweeting about your book, or hashtag specific phrases if you write about a particular topic. People will often click on hashtags related to things in which they’re interested, so being present in those streams is key.

On the more creative side, you can make up a hashtag, pose a question on your timeline, and invite your followers to include it in their replies to you. Not only will you be able to track their responses by clicking on the hashtag yourself, but they’ll be able to see what other people are saying and their own followers might decide to jump in too.

And who knows—maybe it’ll go viral, drawing even more attention to you.

4. If I use hashtags, will my followers take me less seriously?

As with anything in life and social media, moderation is key. It’s okay to get playful with your hashtags, but there’s a thin line between a clever pun and taking things too far. Try not to cram your posts with more hashtags than content, or create super long, complicated hashtags that are hard to read.

And remember that on Twitter and Instagram, hashtags don’t use punctuation. Even if it kills your grammar-loving soul to leave out apostrophes—you’ll look silly if you try it, and your hashtag will break halfway through.

Most importantly, do not stick random trending hashtags on unrelated content in the hopes of attracting people to your profile or website. This is considered a gauche move on any social network, and could be interpreted as spammy behavior if you do it too often.

5. Can I use hashtags when speaking to someone face-to-face?

We’ll just leave you with this to ponder:

For now, the hashtag is here to stay. Although it’s often the butt of jokes and a source of frustration for parents trying to communicate with their teenage children, it can also be a wonderful tool for writers trying to connect with readers on social media. As long as it’s used wisely, the hashtag can be your #bestfriend. (Sorry, we couldn’t resist.)